Despite heightened stock market volatility this week, most market commentators continue to cite the “booming” American economy as reason for confidence that stocks will continue their long bull market run.  Similarly, we’ve heard more than a few analysts theorize that stocks simply can’t enter a protracted bear market stage while the U.S. economy is strong.

To be certain, the most recent reading on Gross Domestic Product (GDP) growth was quite healthy.  On September 27th, the Commerce Department confirmed its estimate of second quarter GDP growth at 4.2%, a level we haven’t seen since the third quarter of 2014.  Over the last four quarters, economic growth has averaged a respectable 2.88%, the highest annual figure since the year ended June 30th, 2015.

But does recent economic growth really qualify as “booming”?

Since the Commerce Department began estimating quarterly economic growth in 1947, the average reading on GDP growth has been roughly 3.22% – well above the average of the last year.  And the last 4 quarters have trailed GDP growth in 56% of all rolling 1-year periods.  In other words, economic growth over the past year has actually been below the long-term historical average.  Even if the 4.2% second-quarter growth rate were sustained over a full year, it would still trail 35% of all rolling 1-year periods. 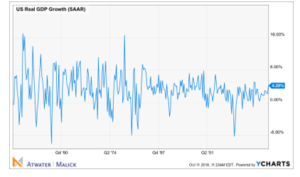 Granted, the American economy is much larger and more mature than it was in the early post-war period, so one would expect lower rates of growth.  And perhaps GDP growth will continue to accelerate in coming quarters.  But, given some historical perspective, recent growth has been solid, but by no means booming, and below the long-term average.

As for the many analyst claims that a bear market is impossible without a recession, history also tells a slightly different story.

In each of these bear markets, stocks turned south while the economy was still growing (in the chart below, recessions are highlighted in gray).  Four of them saw stocks begin falling before the recession started.  And in the other two bears, in 1962 and 1987, a recession never even arrived. 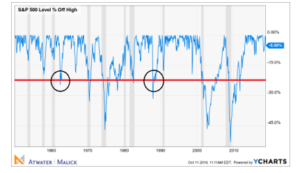 We have no idea if the current market drop will intensify in the coming weeks and months, or if stocks will soon resume their trend higher.  Rather, we’d be wise to remember that equities are extremely unpredictable in the short-term and should only be owned with a long time horizon in mind.

Portfolio changes, including buying or selling stocks, should be undertaken with a focus on asset allocation, disciplined rebalancing and meeting long-term financial goals, rather than on economic prognostications.

What Should I Do?