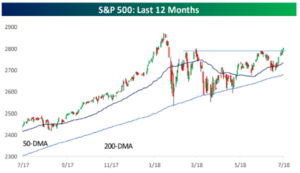 Technical analysis, the interpretation of charts to discern future price movements in financial markets, is a tool that traders widely use.  From a technical standpoint, as of Friday’s market close, the Standard and Poor’s 500 appears to be setting-up nicely to retake its January 26, 2018 highs.  The close last Friday, above 2800 (chart above), an important line of resistance, indicates to technicians that January’s 2872.87 high is within reach.

Yes, believe it or not, the S&P 500 has been in a correction since closing at 2581 on February 8, 2018.  This was a drop of a little more than 10% from the closing high on January 26th.  By definition, a market remains in a correction until it retakes its previous high.

Corrections of this length are unusual. Over the last 20 corrections (including this one), only two lasted longer than 100 trading sessions. The average correction length since the inception of the S&P 500 is 51 trading days. The longest stretch in correction territory was a period of 229 trading days that ended in 1978.

If and when the market takes out its January highs, most technicians would argue this long bull market is poised for another meaningful leg higher.  But if the correction continues to linger, bad news could surface and lead to a deepening of the correction.

We will root for the technician’s optimism to prove prescient.  We will likely break higher or lower as earnings season begins in earnest.  It feels like now is a pretty important time for this bull market.

Enjoy It While We Can