In a recent academic paper, Alex Domash and Larry Summers pointed out that since 1955 there have been eight instances where U.S. wage inflation was above 5% and the unemployment rate was below 4%, as they are now. In all eight, a recession followed within two years.

And just this week, the Commerce Department released U.S. GDP data for the first quarter of 2022, which showed a contraction of 1.4%. If the economy shrinks again in the second quarter, it means that we are already in a recession.

With these kinds of recessionary signals popping up, and with the S&P 500 down over 10% since its January 3rd high (meeting the 10% threshold of a “correction”), we thought a stock market history lesson would be useful.

But first, it is vital to remember that equity markets are 1) completely unpredictable and 2) highly volatile. Nobody knows if we are in a run-of-the-mill correction or the start of a major bear market. And when the next bear market does arrive, nobody knows how long it will last.

But stocks reward patient investors with robust long-term returns because they are volatile. Volatility is precisely why equity investors have earned a long-term premium to U.S. Treasury securities.

In other words, market declines – especially modest ones – happen all the time. They are a normal part of equity investing and should be no cause for panic. And the bounce-back from more significant declines has often been fast and furious, with 12-month returns following 15%+ declines averaging 55%. 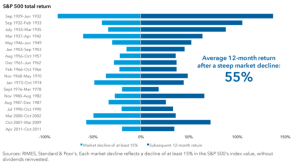 Not only have the initial recoveries been rapid but bull market cycles also tend to last much longer than bear markets and deliver robust returns, more than tripling over 71 months, on average. 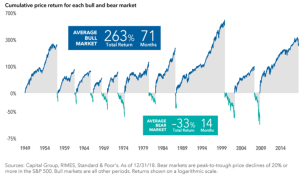 If we do endure a recession, the reasoning is straightforward. An overheating economy created conditions for shortages and price spikes, and in response, central banks are throwing cold water on the economy. Unlike the last two recessions, this represents a fairly “normal” business cycle.

There are certainly extraneous factors at play like excessive stimulus, supply chain disruptions, ongoing COVID outbreaks and war in Europe. But a business cycle-induced recession might be a relief after the unprecedented nature of the Financial Crisis and COVID-19 pandemic.

What Should I Do?