It has been yet another rough week for financial markets. Frankly, it has been a lousy year all around. Stocks are back in bear market territory, with the S&P 500 down more than 20% from its January highs. Bonds are also performing poorly as interest rates continue to spike. Even cash has been a loser in real terms amidst the worst inflation in decades.

The economic backdrop has not changed much since a note we sent on April 29th entitled Recession Risk. At that time, we said, “If we do endure a recession, the reasoning is straightforward. An overheating economy created conditions for shortages and price spikes, and in response, central banks are throwing cold water on the economy. Unlike the last two recessions, this represents a fairly ‘normal’ business cycle.”

As it turned out, the Federal Reserve has taken a firehose to the economy. In our opinion, not only is a recession inevitable, but we are already knee-deep in it. Real GDP growth turned negative in the first quarter of 2022, shrunk further in the second quarter and seems likely to perform poorly for the remainder of the year.

But if we have endured the decline thus far, a recession would be no reason to flee from stocks or bonds now.

Financial markets have an uncanny ability to anticipate future events. Far better than any individual investors, in fact.

The last several recessions illustrate the prescience of markets. 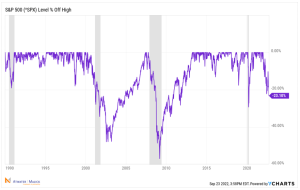 From 1990 through 2020, the U.S. economy suffered four recessions (shaded in gray above). While recessions are informally defined as two consecutive quarters of negative real GDP growth, they are officially determined by The National Bureau of Economic Research.

The 1990 recession lasted eight months and the S&P 500 fell just shy of 20%, short of a bear market. The market’s low point occurred just over three months into the recession, surely before anyone even realized it had begun.

The Great Recession, the worst of this bunch, lasted eighteen months and delivered a steep decline in GDP. Again, in this case, the bear market began months before the economy started contracting and the market’s lows were set before the recession even ended.

If we are indeed in the midst of a recession, we would probably be about ten months into it. While nothing is guaranteed and predictions are futile, market and economic history suggest that we could be closer to the end of the bear market than the beginning, even if the economy faces more pain in the coming months.