A few years ago, we wrote a note about “Zooming Out,” a concept business consultants and life coaches sometimes use to gain a better perspective on problems. The idea is that we often focus on the minutiae of an immediate problem, rather than considering its context in the bigger picture.

Investors are prone to a similar mistake when suffering periods of volatility. In the moment, a market decline can be stressful. We are tempted to seek out strategies to avoid the short-term pain while ignoring the big picture, namely that stocks generate robust returns over long periods of time because they are volatile.

In our last note to clients, we discussed the similarities between our current economy and the 1970s, namely high energy prices, inflation and rising interest rates. However, patient investors in the 1970s earned competitive returns that helped keep up with inflation by staying in the market and reinvesting dividends and interest.

But it wasn’t always easy. From January 1973 through October 1974, a stretch of about 21 months, stocks suffered a severe bear market decline of over 48%, ignoring dividends. Undoubtedly, many investors bailed on equities during this difficult time. 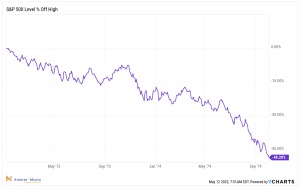 But given time and perspective, or after “zooming out,” the 1973-74 bear market was an intermediate term buying opportunity. 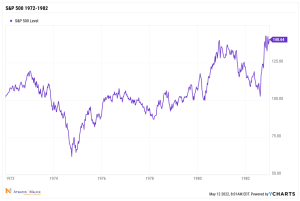 And the longer your time frame, or the more you “zoom out,” the less impactful that bear market really was, if you stayed invested in the market. 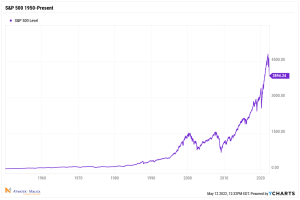 Including yesterday’s drubbing, the S&P 500 is down almost 18% from its high, excluding dividends. In the short-term, nobody knows how much further we will fall. But it’s vital to “zoom out” and remember that we have a disciplined investment strategy designed to meet your long-term financial goals, rather than focusing on short-term volatility and the stress it can induce.